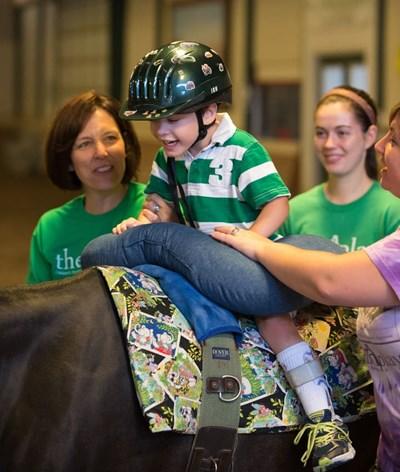 When you meet kiddo Brayden, the first thing you’ll notice is his smile. He may be a little guy, but his smile is huge. And it gets even bigger when he comes for physical therapy at Children’s TherAplay.

In fact, it’s one of the first things his parents noted when Brayden began receiving treatment here at the age of four, how much he enjoyed himself. Yes, he was a little uncertain the first time he rode a horse during physical therapy, but from then on it was all smiles. In time he even began to refer to himself as a jockey.

Brayden doesn’t realize it but his time on the horse is actually part of a leading-edge medical treatment, one that’s critical to helping him manage the effects of cerebral palsy.

Key to everything else he does

As his father Todd explains, “As Brayden’s riding the horse, the horse’s movement helps mimic the human gait and the weight-shifting patterns that he needs to learn to better walk on his own and [it] builds up that core muscle strength. … That core tone is key to everything else that he does, walking and even the upper extremity movements. It just helps with everything from eating to doing better at school – to be able to stand more upright and turn to look at what the teacher is doing and interact with the other students.” 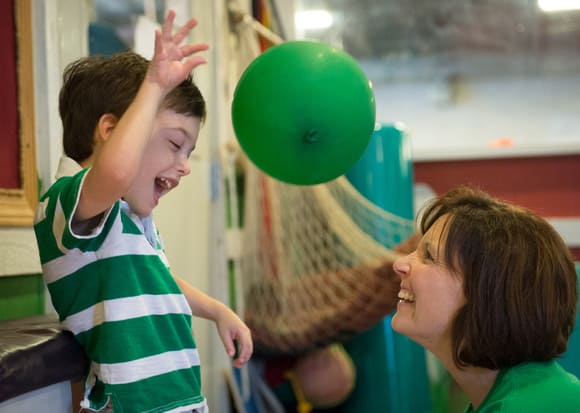 This improved core strength allows Brayden to sit up independently during on-the-horse treatment time. That’s worlds away from his starting point three years ago. When he first began receiving physical, Brayden didn’t yet have the core strength to support himself and, as a result, often received treatment lying down or with a boppy for support. Not anymore. These days Brayden sits up tall and proud on his therapy horse Mikey.

“A whole other level”

He also sits up at home. Before beginning treatment at Children’s TherAplay, Todd noted, “Brayden wasn’t able to floor sit for very long. I had just made a bench for him to be able to start sitting at home. But within the first six months to one year of hippotherapy, he got to the point where he could sit on the bench for 30–40 minutes by himself – independently – and watch TV.” The strength and skills he’s developing create, “a whole other level of being able to interact and interface with the world instead of constantly having to lay down.”

“Brayden, like most of the children we serve, has so much fun during treatment in the clinic and on the horse that he doesn’t realize how much work he’s doing. But there’s so much going on,” explains his physical therapist Teresa Keathley. “We’re developing his lower extremity weight-bearing and challenging his balance and coordination so he can walk better. We focus a lot on pelvic stability and core strength to allow Brayden to be more independent.” 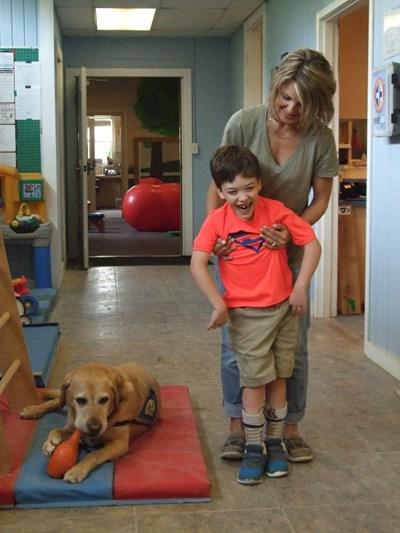 All that hard work is adding up. Last year when his family went to the Jersey shore for vacation, instead of being carried, Brayden was able to walk in his walker all the way from the house to the end of the boardwalk and back – a distance of about one-half mile – on his own. Dad and Mom, and of course Brayden, couldn’t have been more pleased. “He’s definitely gotten a lot stronger.”

His parents continue, “…We’ve seen great improvements and we look forward to seeing Brayden achieve even more. From birth to age nine or ten the brain has its highest level of plasticity, making it easier to form new motor neural networks. All of the hard work that Brayden is doing now is laying the foundation for the gains that he will be able to make in the future. The benefits [from treatment] now are going to be with him for the rest of his life.”

“He loves being here”

Since that big, half-mile walk Brayden has gone through a huge growth spurt. As is common in cerebral palsy, his muscles and bones are growing at different rates, which causes his already-tight tendons to become even tighter. As Todd tells us, with each growth spurt Brayden “almost has to retrain his muscles. So unfortunately his walking has regressed a little bit from that high point last summer, but he’s working on increasing his strength and coordination with his new larger frame.”

According to physical therapist Miss Teresa, Brayden is up for the challenge. “He’s always so happy and motivated to work hard in therapy. The work we do is challenging but the only time Brayden complains is when it’s time to leave. He loves being here.” And we love having him.

Kiddo Brayden is working with Miss Teresa to strengthen his standing balance, upper extremity wight-bearing, and eye-hand coordination during physical therapy. And facility therapy dog Dorian is there to help!

On Teresa’s command, Dorian gently puts his front paws on the physio ball and offers his friend Brayden a toy. And while it seems to Brayden that this is just a fun game, he’s having to work *really* hard to support his upper body, lift his head, team up his eyes and hands, and grasp the toy … before releasing it for Dorian to retrieve again.

The work Brayden is doing with Teresa and Dorian will serve him well as he can more easily drive his motorized wheelchair, use a walker, and generally be more independent. Keep up the great work buddy!

As Brayden’s riding the horse, the horse’s movement helps mimic the human gait and the weight-shifting patterns that he needs to learn to better walk on his own and [it] builds up that core muscle strength.