Cheer along with Maxwell and his mother Jenna (who is also an occupational therapist!) in this video as they share more about their journey.

"I knew where I needed to bring him"

During Maxwell's first year of life we had him in and out of therapy, but when we received his diagnosis and knew therapy would be a significant part of his life, I knew where I needed to bring him: Children’s TherAplay. Why? As fate would have it, my career path led me to be an occupational therapist. I'll never forget the day in graduate school when we went to a place called Children’s TherAplay to see how they were using horses as a part of the children's treatment. I knew with Maxwell's diagnosis that the benefits of hippotherapy would be immeasurable.

At 18 months of age Maxwell was only able roll from place to place and transition in and out of sitting. He even had to have his drinks thickened because, each time he would drink, the liquid would go down into his lungs. All that changed when Maxwell started receiving physical therapy and occupational therapy at Children’s TherAplay.

It gets even better. A few months ago, in August, my husband and I watched Maxwell walk into his school on his first day of preschool without his walker. Today he is walking independently almost 100% of the time.

Every step of the way

Maxwell is now three years old and continues to become more independent each day. He is beginning to walk up and down stairs with assistance and is even trying to run. He continues to progress with his fine motor skills as well, developing his prewriting skills for school and assisting more with dressing himself. We couldn't be more grateful for Children’s TherAplay. We love seeing our little boy gain confidence and take pride in being able to accomplish new things. We continue to look forward to what Maxwell's future holds knowing that Children’s TherAplay will be with him every step of the way.

For the very first time

All of us at Children's TherAplay celebrate when the kiddos make progress, so when Maxwell's therapist called out, “You have to see! Come see Maxwell!” many feet headed toward the clinic. And we were just in time to see for ourselves: Maxwell was standing, independently, for the very first time in his life.

As you can see in the video, we’re not the only ones celebrating. Maxwell cackles with glee and does a happy dance!

He may have been thinking, “Just wait ‘til they see what else I can do!” Only a few short weeks after this major milestone, Maxwell began standing up, unassisted, from the middle of the room. Way to go buddy. We’re so proud! 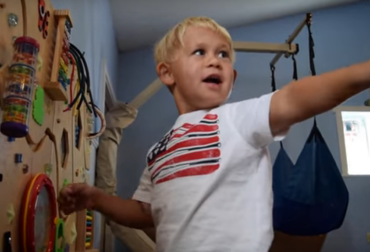 A few months ago my husband and I watched Maxwell walk into his school on his first day of preschool without his walker. Today he is walking independently almost 100% of the time.