Watching a child progress from scooting to crawling, then standing, and finally taking those first big steps is one of the great joys of parenthood. For Leo’s parents though, it seemed like these particular celebrations might not come.

There were many other things for Matt and Laura to celebrate – two-year-old Leo was bright, loving, and so full of life – but these milestones were not among them. At least not until Leo began receiving treatment at Children's TherAplay. (Leo's story continues after the video below.)

When the folks at United Way of Central Indiana read Leo's success story they reached out to us with a question: Would it be alright with us if they created a video about Leo? As you can see in this loving video portrait, the answer was of course Yes.

Physical and occupational therapy at Children's TherAplay is, as his mother tells us, “Leo’s most favorite thing. He lights up when we say we’re going to the barn and I would tell absolutely anyone that was curious about it treatment at Children's TherAplay, they should certainly try it. It’s really had a profound impact on Leo.”

Matt shared, “Leo was a pretty extreme case in terms of his lack of muscle tone and his ability to do things like, when he was a baby, to lift his head up off the floor, much less sit up or crawl or take bites of food. We started by feeding him with an eyedropper orally. We really were starting from scratch.”

Scratch is a good place to start

Leo had been receiving physical, occupational, and speech therapy through early intervention but the progress was slow.

Laura noted, “He would develop and then he would tend to plateau. And we would hit these stretches that sometimes lasted quite a while where there just wasn’t any progress. Once we got to Children's TherAplay, it was almost a weekly basis where we were seeing things that he was making progress on. So the pace at which he learned and the development continued – it was just so apparent that that pace was so much quicker after having started at Children's TherAplay.”

A day to mark on the calendar 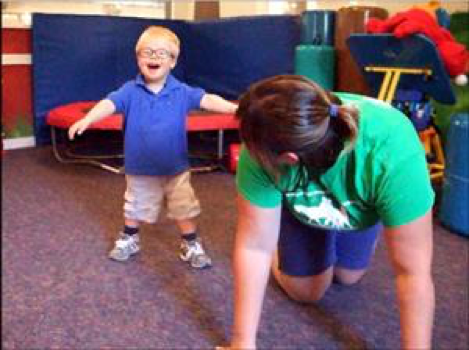 Crawling involves balance, sequencing, and both upper and lower extremity strength, all of which were 12 months delayed in Leo. During his initial physical therapy evaluation, he was unable to hold himself up in the hands-and-knees posture for more than three seconds. After nearly two years of prior therapies, “We had given up on crawling,” explained his parents. But seven months after he began equine-assisted physical therapy at Children's TherAplay this child, whose primary means of locomotion has been scooting on his bottom, crawled to the top of the stairs at home and announced, “I did it!”

It was a day to mark on the calendar. And there were more celebrations to come as Leo began walking with the aid of a walker, then taking a few steps unassisted, and finally walking independently. Now, almost two years after he started treatment at Children's TherAplay, Leo is proud to walk from the car to the clinic and out to the arena – as well as all around his house – all by himself.

“He’d taken his pants off!”

Matt and Laura were also seeing gains from equine-assisted occupational therapy. Prior to treatment at Children's TherAplay Leo was unable to dress or undress himself and relied heavily on a gastrostomy tube for nutrition. These days he uses utensils to feed himself and takes off his pants and shirt independently.

“There’s definitely a growing sense of independence,” his mother explains. “He likes to take his own jacket on and off since they’ve been working on the dressing. My favorite story is that they started working with him on undressing, and [outside of treatment] I kept finding him and he’d taken his pants off!”

“Off to the races”

When Leo first came to Children's TherAplay he could sign any number of words – especially the word horse – but he spoke only a few and rarely. “It’s always been very clear to us that Leo certainly understands what’s going on around him,” Laura shares, “but it’s more that he can’t make his body cooperate, to really respond the way that we’re used to.”

Within a few months of beginning equine-assisted physical and occupational therapies however, Leo began babbling and then speaking words like “hey” and “ball.” Laura continues, “He’s been saying words and now it’s two- and three-word phrases. And it just continues to grow.”

Although Children's TherAplay does not offer speech therapy, the equine-assisted therapies Leo was receiving paved the way for gains in speech and language. As Matt sees it, “[Children's TherAplay] was one of the first things we did where Leo seemed to light up and enjoy being a part of. So, it connected with him. And then all those other things in his body and his mind started to – I don’t think it’s overstating it to say that those things all started to click together. It was like that first little thing that sort of connected it. Then we were kind of off to the races.”

“How sweet it is”

As you might imagine, all of this has had a significant impact on Leo’s family. “It’s obviously a huge deal,” said Matt. “Leo turned four in August and we spent well over the first half of his life in what we would call survival mode, trying to stay out of the hospital, trying to get off of oxygen, trying to get him to just do the things he needed to do to get going. And it wasn’t until the last year, year and a half, that it’s been forward progress … versus just survival. To us, Children's TherAplay has very much been a part of it.

“We’re having a lot of fun right now. [Laughs.] It went on long enough that it’s certainly not lost on us how sweet it is for Leo to be able to communicate and move around and be a kid.” 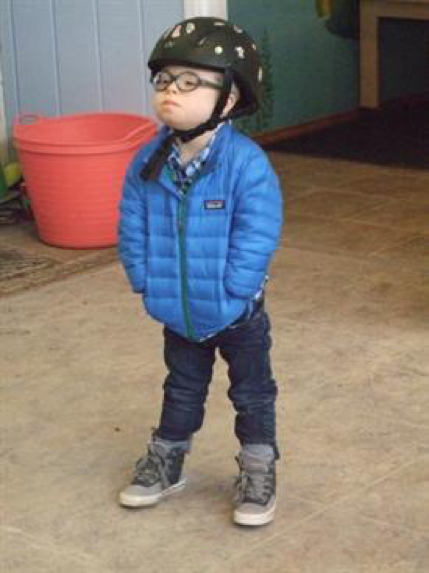 Just as sweet is the fact that equine-assisted therapy at Children's TherAplay is, as Laura tells us, “Leo’s most favorite thing. He lights up when we say we’re going to the barn and I would tell absolutely anyone that was curious about it [treatment at Children's TherAplay], they should certainly try it. It’s really had a profound impact on Leo.

“I was just asked by another mother last night at a gathering, ‘Does Leo go to Children's TherAplay?’ I said, ‘Absolutely! Are you considering it? Because you should.’” We’re so very glad Leo’s family did.

A look behind the scenes 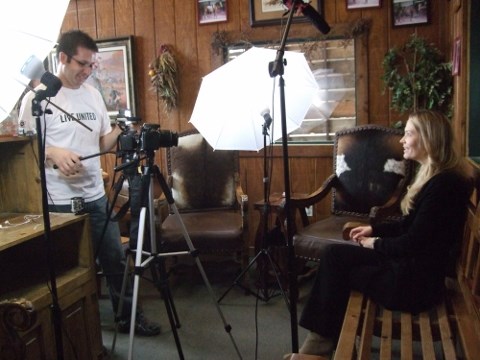 If you enjoyed the Friday Success Story video, created by United Way of Central Indiana, about Leo – it's one of our favorite videos ever – you'll appreciate this special blog post about the making of the video. 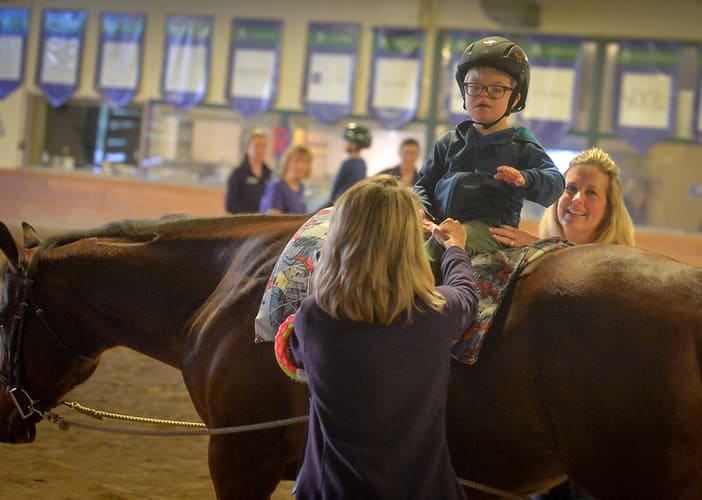 I was just asked by another mother last night at a gathering, "Does Leo go to Children's TherAplay?"
I said, "Absolutely! Are you considering it? Because you should.”

Join Our Online Family (It's Fun!)